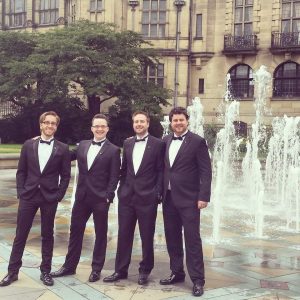 Gold Medallist at BABS in 2013

“The Emerald Guard are Antoine (tenor), Tim (lead), Duncan (bass) and Andy (glorious baritone) have known each other for a long time and have been singing together officially for around six years.

Contrary to popular belief the quartet’s name does not have Irish roots, nor does it come from any reference to The Wizard of Oz. The true origin of the name is far more obscure and frankly puzzling. It comes from a Japanese game show from the 80s called Takeshi’s Castle (oft repeated on Challenge TV, voiced over by Craig Charles) which is like a low budget “It’s a knockout”. In the TV show The Emerald Guard are defenders of Count Takeshi’s Castle so obviously it makes a lot of sense to name a barbershop quartet after them (…)

In their spare time, they generally just sing more barbershop, most significantly with Sheffield’s barbershop chorus, Hallmark of Harmony.

The quartet are delighted to be here and would like to thank Holland Harmony for having us and look forward to making new friends as well as catching up with everyone we know already through this hobby. Come say hello, and sing songs and tags with us!”